The classic car market has never been more buoyant yet how many of these wonderful masterpieces of yesteryear are still driven, or driven in a manner that their makers originally intended?

The classic car market has never been more buoyant yet how many of these wonderful masterpieces of yesteryear are still driven, or driven in a manner that their makers originally intended? For some owners these machines are seen merely as investments while others like the concept of driving a classic car but the experience can be a let down. Concerns about reliability, recalcitrant transmissions, erratic air conditioning and a lack of the creature comforts and the connectivity we all take for granted these days see many a classic car sit gathering dust rather than being driven.

And it’s with this in mind that ARES DESIGN has unleashed its stunning reimagining of the classic Porsche 964. The car in question is a 1991 Carrera 2 Targa and while a casual glance might not give the game away, under its stunning bodywork and inside its cockpit it tells a different story – this is a 964 with a modern twist thanks to it incorporating finely-honed components from a more contemporary Porsche, the 997 Carrera.

The recreation of this stunning 964 commenced with a complete strip down of the car to a bare shell and while the rigours of 27 year’s-worth of use hadn’t taken too much of a toll on the Targa any rust was cut out prior to the shell being acid-dipped and repairs being made before the entire shell was e-coated. Once ARES had a perfect shell it was time to work out the precise nature of the conversion. As the 997 is considerably wider than the 964 – 1808mm versus 1651mm – the 964 would be equipped with the considerably wider front and rear wings and bumper assemblies from a 964 Turbo.

Certain sections of the shell required modifications and fresh mountings for items such as the 997’s engine and PDK transmission. Having carried out CNC machining for the axles and body mountings the engine and transmission were installed. It’s no ordinary engine though as ARES’s technicians set about unleashing more power from the superlative straight-six. The 997’s 3.8-litre DFI engine has seen a capacity increase to 4.0-litres with bespoke pistons and Nikasil bore-linings along with the cylinder heads from a 997 GTS to produce 470PS, significantly more than the 964 Targa’s 250PS.

Simply installing the 997’s engine and transmission was only the start of the work though. In order for the 964 to handle the additional power ARES went about installing the complete front and rear axles from the 997 including wheel hubs, tie rods and control arms. The steering system, including the 997’s power steering set up was transferred to the 964 along with a significant amount of equipment a 964 owner could only have dreamed of in 1991. 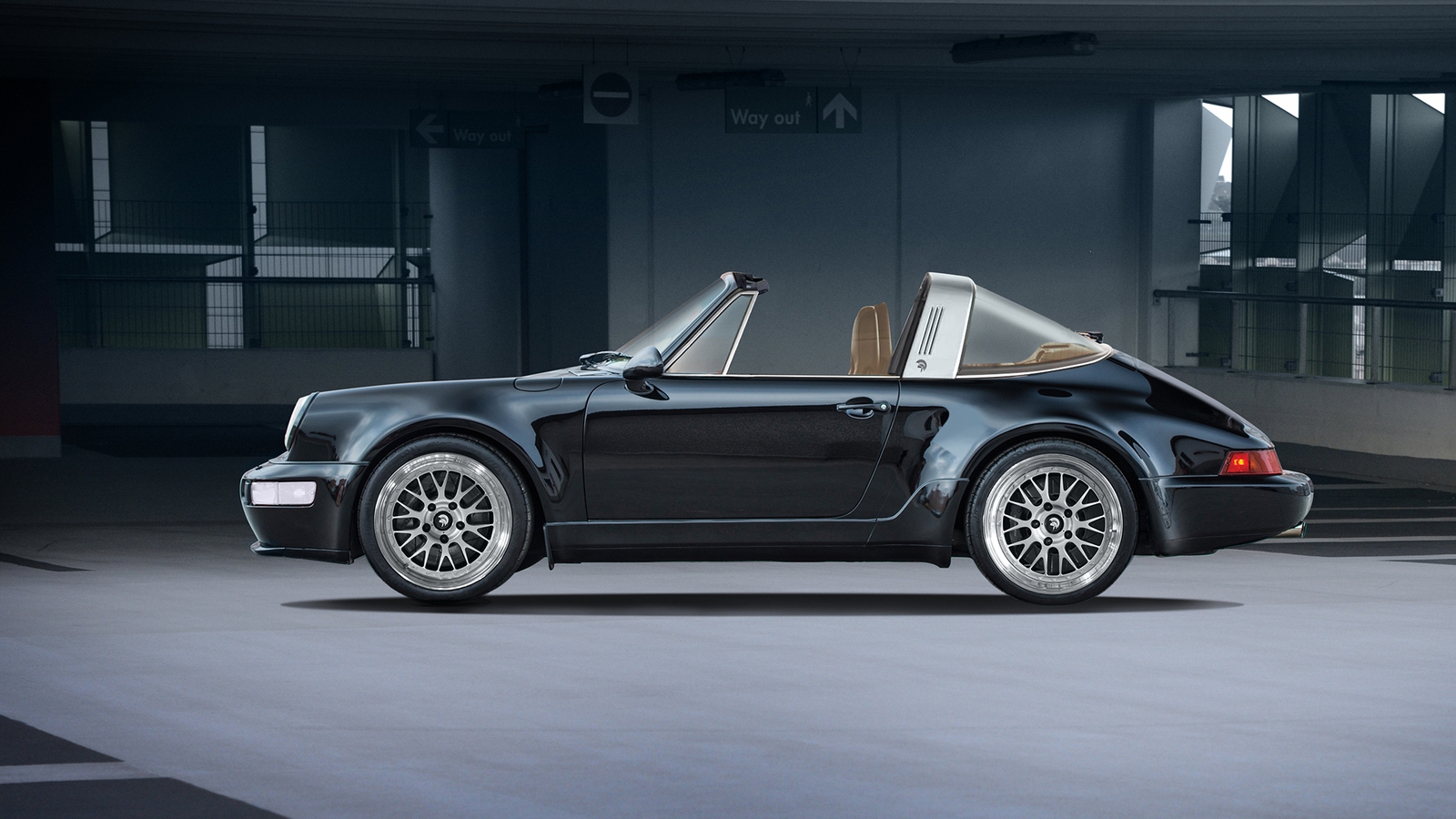 Thus, the ARES 964 Targa now features 997 ABS (using the 997’s Brembo four-piston calliper set-up), 997 stability control and the 997’s Porsche Active Suspension Management system. Incorporating all these hi-tech systems into the 964’s electronics would have been nigh-on impossible so the 997’s entire electrical system was transplanted into the 964.

The interior is an exquisite mix of the old and the new. The 964’s seats and cockpit have been retrimmed while the 997’s centre console has been adapted to fit the 964’s smaller dimensions. The dash hasn’t been forgotten, now featuring the dials from the 997 that has required the manufacture of a bespoke instrument cluster that looks perfectly in keeping with the style of the 964. ARES’s technicians have also installed the navigation system from a 2018 Porsche Panamera, neatly incorporating it into the 964’s architecture, something that has never been done before.

Externally the body appears to be that of a 964 Turbo but its lighting has been upgraded with LED units discreetly housed in the original light assemblies.

ARES’s 964 Targa is undoubtedly a remarkable vehicle and a testament to the prowess and perseverance of its skilled technicians to overcome seemingly insurmountable problems to recreate a stunning vehicle. All the good looks and undoubted style of the Porsche 964, yet packing all the latest technology from the 997. A truly sensational one-off creation.